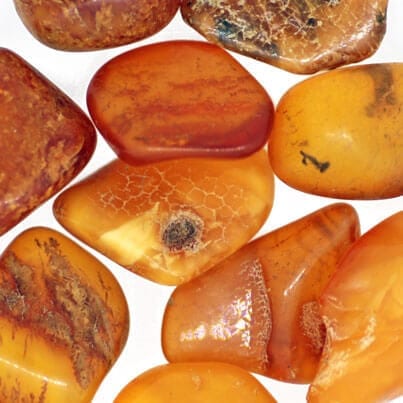 Amber is an ancient tree resin, generally found washed up on the shores or found in the nets of fishermen in the Baltic sea. This is the most sought after Amber due to its level of acidity., Amber is also found in the Dominican Republic and Sicily, but not much of that finds it way to the United Kingdom. Considered a ‘mystical’ resin, it was used by the ancients as a ‘hex-breaker’ and healer of things like asthma, convulsions, bronchial disorders and the plague Pieces of Amber were drilled and worn on the throat chakra around the neck. Amber necklaces and bracelets were given to babies to teeth on.

Able to absorb negative energies, Amber can trigger the mind into remembering the soul.  In ancient times, particularly to the people of ‘the craft’ throughout the United Kingdom and Europe, this fossilised resin was a favourite material for amulets – worn as protection from the ‘evil eye’.

It was believed to have the power to protect from the danger of the plague and a large piece would be worn on the throat chakra to prevent nasal catarrh, hay fever and asthma. Many ‘high priests’ and ‘priestesses’ even today will wear Amber beads interspersed with jet for their magical properties.

Amber, in its rough state, is also used as an ingredient in incense for rituals of love and healing. As an oil it is extremely thick in consistency with a camphor-like odour. It is usually mixed with a carrier oil to dilute its strength and used to rub or massage onto the body to relieve aches and pains. It is rare to find true Amber oil. Jewellery quality Amber is often boiled when the tiny droplets of water trapped within expand and fan out to make attractive designs in the clear resin. Occasionally, tiny insects become trapped within the resin. Needless to say, these samples can be extremely valuable.