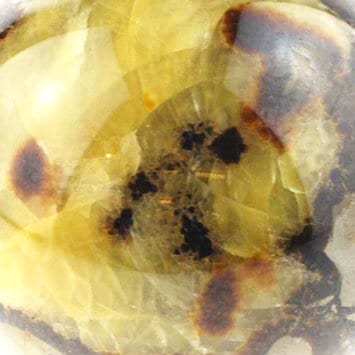 Septarian Calcite is a combination mineral. It is Yellow calcite, Brown Aragonite, Gray Limestone and White/Clear Barite. Much available Septarian Calcite is from Madagascar. Formed after the volcanic eruptions during the cretaceous period some 70 million years ago.

Many of the smaller sea creatures around the island were killed during the time of the eruptions and their remains sank to the sea bed. Over time these decomposed minerals bonded with the rich sediments on the sea floor forming balls of assorted minerals. As the sea gradually receded the mineral balls became exposed and sat around for a few million years in the sunshine drying out and shrinking into tight rock nodules. When these were cracked open the amazing patterns could be seen. Septarian calcite can be found in a few other locations where the circumstances have been right. The gulf of Mexico had similar volcanic activity and produces good quality Septarian calcite also.