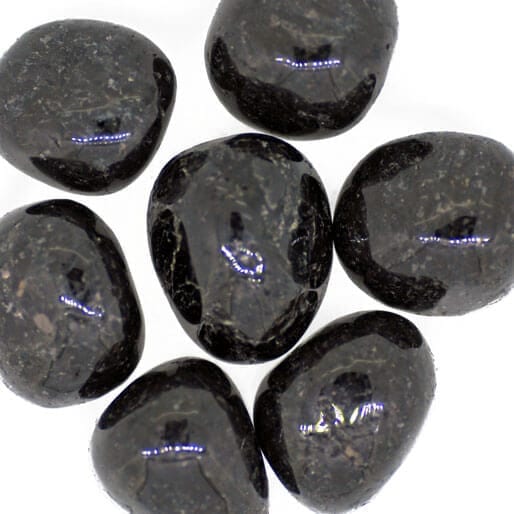 Nuummite was new to me only a couple of years ago and oh my goodness are healers talking about this mineral. Nuummite is found high up in the very inaccessible mountains of Greenland.

It can only be mined for a few weeks during the summer months. When polished Nuummite looks dark and vitreous with tiny particles consisting of anthophyllite and gedrite glittering under the surface. These minerals constitute a mixture of elongated crystals, often thin and blade- like in appearance, that cause an optical effect. These tiny flecks shimmer under the surface of this dark mineral with iridescence. This is intriguing and can be quite mesmerising to stare at.

The information that has been shared about this crystal is this: it releases and exposes one’s alter ego, it brings up one’s darker side, it brings to the surface things that have been long buried deep inside and that one wishes to forget or erase, it shows one the illusions in their lives. Once these sometimes unwelcome issues have risen to the surface, Nuummite transforms them and clears the blockages they created.

Given the name the ‘Sorcerer’s stone,’ some attribute magical properties to it and say it will teach awareness and self-mastery. Used for meditation, it will open the crown chakra and enhance psychic abilities. Nuummite is a relatively new crystal for natural healers and so is in its infancy for recorded – tried and tested- energy healing data. However, it is making a name for itself for deep tissue work, releasing tensions gathered in the muscles that have been caused by traumatic emotional energy blockages. Nuummite also releases pain under the muscles in the tendons that attach the muscle to the bone and in the tendon sheaths whose purpose it is to minimise friction associated with movement at the joints.

At this stage, more information needs to be collated about this, but it is fascinating to hear all the positive feedback about Nuummite.