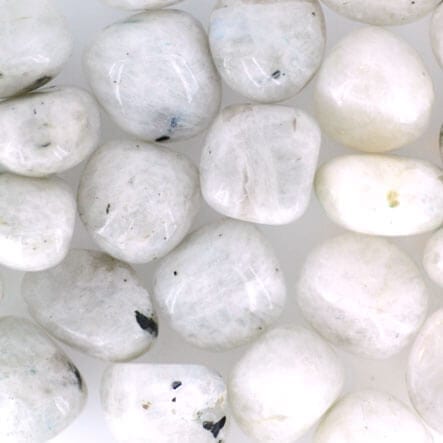 The full rainbow spectrum flashed across the surface of Rainbow Moonstone instantly draws attention to the fact that it contains the magical powers of the Moon Goddess.

It will not surprise you to know that rock brought back from the space flight of Apollo 11 that landed on the Moon on July 20th 1969 was actually a piece of Rainbow Moonstone.

Rainbow Moonstone has the strong energy of divine feminine about it and pieces that display a vivid blue sheen are often used for connection to the spiritual world. These are treasured to enhance psychic gifts and the opening of the third eye; for connection to the Moon Goddess, spell casting and divination.

Rainbow Moonstone is white Labradorite technically and represents the light. Wear it to attract light into your life. Rainbow Moonstone is gentle and works to attain ones highest good. It helps one to be honest with oneself and not to harbour negative thoughts or emotions. It teaches the power of forgiveness, of emptying or deleting from ones memory passed hurts, pains and sorrows. And it promises new beginnings.

Blue moonstone is a member of the feldspar group. It is predominantly white and a good specimen has a beautiful blue chatoyancy emanating from under the surface. This is the rough tumbled moonstone, the higher gem grade is known as rainbow moonstone.
Blue moonstone has all the qualities of moonstone with the energy of following ones destiny no matter what. It is capable of pushing one towards ‘new beginnings’ and starting over, especially useful when it is the last thing that one wants to do. It is in tune with the moon and works on balancing the emotional body first before expanding onto the rainbow chakras of the body. It can build bridges allowing the user to tap into the collective consciousness and move into a greater connection with all beings on all paths.