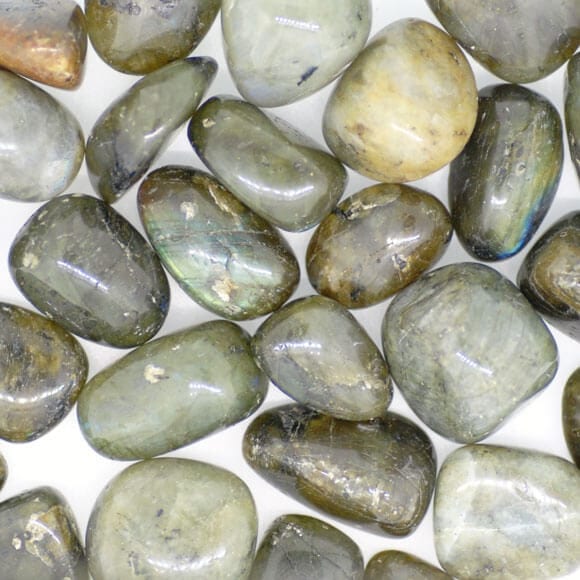 Forty years ago if you were lucky enough to come across a piece of Labradorite it would have looked like a piece of sparkly hard coal or granite. We never saw it polished and healers would say that it was the most magical of minerals although it didn’t appear quite so.

Labradorite in its raw state was ‘interesting’ mysterious and thought provoking but only the most sensitive were truly able to feel its potential. The first polished pieces came much later and once one saw the flash of incredible labradorescence one knew that everything that was felt needed multiplying by a thousand times. The mystery of Labradorite lies it it’s fascinating molecular structure that consists of many micro fine  layers that seem to trap and refract the light. Held under a light source and moved around the light catches from certain angles and shafts of rainbow colours blaze brightly. Incredible interference colours that flash and move and dance and as quick as they are found they are gone. Spectacular displays of scattering light.

A shaman preforming a healing would take a piece of polished Labradorite and wave it around the aura concentrating on on the Ladradorescence, where it shines and flashes and more importantly where it does not. From this humbly respectful way of using the Labradorite much information can be gleaned. Where Rainbow Moonstone represents the the Moon Goddess, Goddess of light, Labradorite represents the Dark Moon Goddess. She who is unseen, the dark side of the moon that never shows its face. Things that are buried deep within the psyche, emotions that are hidden, fears, guilt, loss, addictions, abuse etc are bundled up in tight energy balls or pockets and carried in the aura. They weigh one down and feed on ones insecurities, weakness and anxieties. They keep one small, stop them enjoying their path and in extreme circumstance can make very ill.