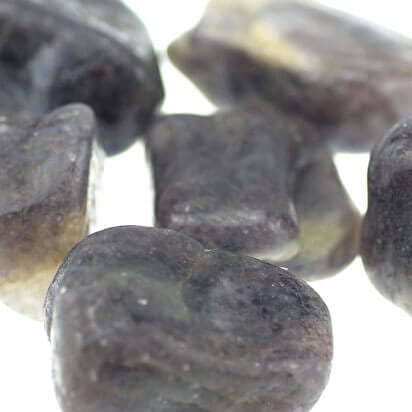 Iolite is sometimes referred to as the ‘water sapphire’; what a beautiful way to describe a crystal! Iolite is the gem variety of the mineral Cordierite. A blue/violet gemstone that is often overlooked. Translucent crystal quality Iolite is rare and often mistaken for Amethyst.

Iolite works on the throat and third eye chakra, yet very different from Amethyst.

The energy of Iolite is strong, decisive and stimulates the intellect. Iolite activates the throat chakra, aligning it with the third eye and crown chakra. It encourages logic and reason by disengaging or over-riding the emotions and emotional responses.

In healing, Iolite is often used for those who have experienced suppression, been subjected to dominance, bullying, abuse, neglect, repression, criticism, containment or have struggled with inhibitions. Once aware of or away from these controlling limiting conditions, Iolite helps by soothing the mind and clearing brain fog. Wearing jewellery or keeping Iolite touching the skin will keep your emotions under control, allowing you the space to think logically. It will help you find your voice and to communicate articulately. Gradually confidence, self-assurance and happiness will be given a chance to bloom.

Iolite is excellent for chronic anxiety or phobias. It’s good for building confidence, concentration and creative expression. Iolite brings joy, success and abundance. It possesses the feel-good factor. Everything will be well when wearing Iolite.

If Iolite were a tarot card, it would be the King of Swords as it holds the energy of this archetype. This crystal is self-discipline, mature, head over heart, rational, logical and stable. It has inner strength and calms confusion and inner turmoil. Use Iolite when you need to make decisions. Like the King of Swords, which is an air energy sign, Iolite helps to stimulate the intellect cutting through chaos.