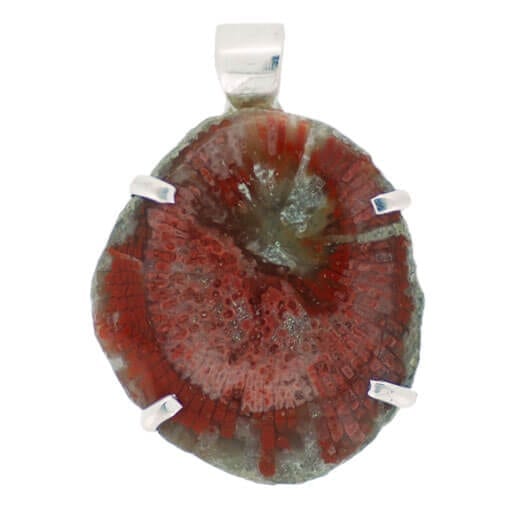 This particular ancient Coral reef strangely enough now is situated thousands of feet up in the Utah mountains. The rare red Horn Coral would have been considered a treasure to the Native American Shaman who would travelled far and wide to collect or trade this hidden gem. There appears to be no mining for this Coral now except a few prospectors picking over the area and occasional finds.

Horn Coral gets its name from the way the Coral formed. Think of it like the branches or roots of a tree or horns of a stag. Over millions of years the natural original organic material has been replaced by minerals that give the Coral Agate its now beautiful colour.

Used as a lucky charm worn around the neck to attract good fortune. Red Horned Coral is worn as a sign of respect for the Goddess and although a water element it’s colour denotes fire, passion, fertility and inspiration. The Sharman would recommend the women elders to wear Horn Coral to aid the working together and co-operation of the tribe.

Native Americans believe this to be an important stone for them and would treat it with respect. It is quite rare and not always available so this adds to its allure and value.

We believe that the red Horn Coral from Utah was considered a very spiritual stone for a nation to posses. It is said that it would have been used in ceremony to bring cohesion of the tribe, it would adorn the handle or be the handle of the talking stick. It would have been used in sacred divine ceremonies to protect and bring fertility to the woman, protect the young women approaching puberty and aid prophetic visions in dream walking. This is a stone of mystery and magic, of bygone shamanic workings and of rediscovery in the wisdom of our ancestors.