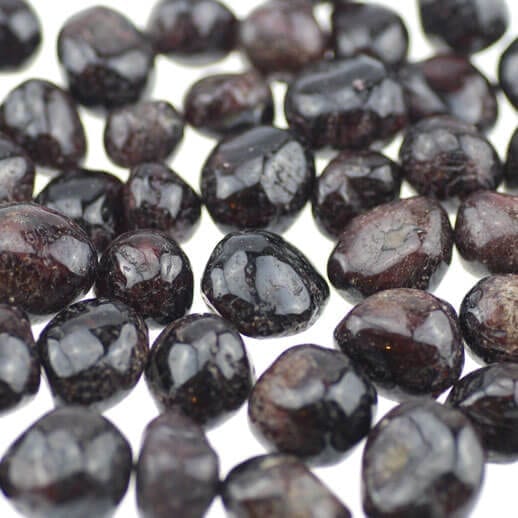 Similar to Rubies, Garnets are believed to attract wealth. They say keep a piece in your purse and your purse will never be empty. Garnets and Rubies have adorned royal crowns and sepulchres for centuries. They are found the world over to represent opulence and good fortune.

Magically both are used in spell craft for these very reasons, attracting good fortune and wealth. Confidence to make good business decisions and prosper. Garnets and Rubies give one plenty of reasons to be grateful.

Known as the ‘daydreamer’, Garnet is believed to regenerate body systems – especially the bloodstream where it is also a good purifier. It is also strongly associated with the balancing of sex drive and emotional disharmony. It is believed to be aligned to the base chakra. It can bring love, compassion and an enhanced imagination.

It helps to strengthen those who willingly attune to it and wear it. It can warn of approaching danger and forces us to make honourable commitments and decisions.

The deep red colour of Garnets have fascinated humankind for millennia coming in a variety of shades, compositions and sizes. There is the gem quality of translucent deep red Garnet with some of the best coming from Sri Lanka. Then there is the family group of Garnets known as silicate minerals. These include; Pyrope (Rhodolite Garnet) Mg3Al2Si3O12. Almandine Fe3Al2Si3O12. Spessartine Mn3Al2Si3O12. Andradite Ca3Fe2Si3O12. Grossular Ca3Al2Si3O12. Uvarovite Ca3Cr2Si3O12. As you can see the mineral composition changes and therefore the energetic qualities change slightly also.

All garnets are considered lucky. They are carried in wallets and purses to bring wealth. They are worn to ward off negative attack and protect the owner. They are considered passionate, sexual and emotional often placed on the base chakra during a healing. Let us delve into the mysterious world of Garnets and find some hidden gems in their family group.

Rhodolite Garnets are deep rosy pink in colour belonging to the group of silicate minerals known as pyrope. Rhodolite is recommended by healers to work on emotional healing. When ones emotions are raw, worn out and ‘dysfunctional’ this is one of the best crystals to stop any more damage occurring whilst healing begins. It works on the heart encouraging self love and worth. It is gentle kind and loving. No tough love here just coaxing, enticing, alluring and tempting one into a healthier state of mind.

Rhodolite is a great crystal for working on those who self harm, those who feel life has no meaning for them and those recovering from sexual abuse. A powerful little crystal that energetically can create change and bring back the hope and joy in ones life.

We live in a very chaotic dimension. Things rarely stay the same physically, emotionally and spiritually from day to day. Living in the moment is all well and good but there are some things we need daily. Food, water and shelter are a given for our physical survival but we are so much more then this. Garnet in Limestone helps are find our boundaries and grounds us. It teaches ‘to they-self be true’.

Limestone is made up largely of two minerals, aragonite and calcite. Calcite is a calcium carbonate on the periodic table CaCO3. The make up of calcium carbonate is mostly from tiny sea creatures shells and living organisms and organic remains. Aragonite has the same physical and chemical make up requiring fresh water and marine creature environments.

Use Garnets in Limestone in the use of crystal grids. For redirecting energy away from your home and for placing protective boundaries around work-space or bed.

Works on the root chakra and the Earth star chakra.

Almandine Garnets are associated with the archangels, the Goddess energy and Mother Earth, all powerful archetypes. Strong, safe, secure and abundant this crystal is treasured as one to create wealth and bestow blessings. A magnificent crystal for fertility, female sexual satisfaction, the sex drive and energy. Used to awaken the kundalini energies and often used to adorn images of tantric sex. The qualities of Almandine Garnets have been treasured in the east for centuries. Used as a crystal for psychic protection, for channeling angelic communication and fulfilling dreams.

This crystal should be carried in a little pouch on the body, used like a magic potion and respected as an aspect of the divine feminine.

Cherry Cake Garnet is ref garnet in a natural matrix of dark biotite mica and quartz. The look of the crystal is that of a piece of cherry or blueberry cake from which it gets its name. This crystal as well as used in money spells and for creating luck is used for bringing couples together harmoniously in love and devotion. Many couples loose their sparkle as the years go by but Cherry Cake Garnet is a crystal that if both city a piece with them triggers the memories of falling in love. It doesn’t make them fall in Love all over again exactly but reminds them of what they were attracted to in each other and the feelings that lead to love. This crystal stimulates or triggers some of our better qualities, love, devotion, faith, courage and loyalty. A great crystal for those deciding if their relationship is worth fighting for. If there is enough emotion left to rekindle the flames of attraction and passion. It brings clarity of vision in seeing things exactly as they really are and having the courage to make changes no matter how hard or difficult they may be.

Cherry Cake Garnet is a great healing crystal for regeneration of the physical, emotional and spiritual bodies. It helps to clear negative, destructive and dysfunctional thought consuming behavioural patterns that can destroy us and ruin our beautiful precious lives.

Can also be used to mend family relationship.

Spessartine Garnet is the ‘brave heart’ garnet that helps one to overcome situations, particularly ones own fears and phobias. It encourages one to be brave and spontaneous and too rely on ones own intuition. One of the biggest things that hold us back is the fear of the unknown followed closely of course by failure.

Spessartine Garnet as well as for luck, wealth and opportunity is also for daring, caring and sharing. Great for pushing one creatively, too write that book held deep inside, to paint that emotion or sing that heart felt song. A crystal to calm nerves and create confidence. Pushes one to believe in a glass half full and optimistic outcomes. A great Garnet for spell casting, grid work and healing pouches.