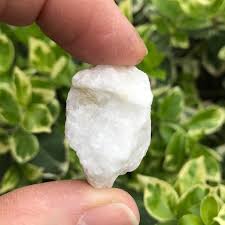 Angelinite is another new and rare crystal find for us. Discovered in Vermont USA this crystal is a white (silicon dioxide) Quartz calcium carbonate sometimes with trace elements. We believe that it is named Angelinite because of the white shimmery refraction on light play on the crystal when held up to the sunlight.

As a newcomer onto the block once again little is known about the possible healing qualities of this crystal although it is proving to be very collectible with little available as yet.

Energetically it is a brilliant clear energy that appears to resonate at a high frequency. Holding Angelinite stimulates the crown chakra and produces a feeling similar to a light pressure in the energy centre pulsing from the centre outward. Placed on the crown chakra initially for too long may result in a mild heady kind of headache so perhaps short sessions might be more beneficial and build up from there. As the crown chakra opens more universal energy can stream in and the connection to source or universal energies is strengthen.

The second chakra centra that appears to be stimulated by this crystal is the ‘Well of Dreams’ or the Alta Major Chakra. This is a very important centre at the base of the skull and the top of the spine at the back of the head. Some refer to this centre as the ‘mouth of God’ but most healers we have spoken to believe that this is the energy centre that becomes active when one is ready to receive messages from spirants have angelic communication. With practice this centre can become the one that many mediums use for transmediumship. Many say that this is also the energy centre required to open naturally in order to leave the earth plane peacefully and to ascend upon passing over.