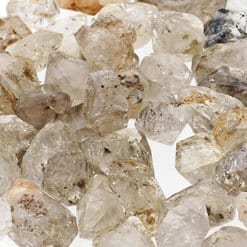 These amazing crystals with incredible diamond like clarity have been sort after for thousands of years. The true Herkimer Diamonds come from only one location in Herkimer County, New York. The Mohawk Indians treasured them and used them for shamanic work. They also made a valuable asset when trading. The Mohawk Indians found the Herkimer Diamonds in the sediment of rivers and from cultivating their fields.

A Herkimer Diamond is the ‘ultimate’ in attunement stones when it comes to clarity in the perception of one’s relationship with another person, place or activity. The supreme clarity of these crystals comes from the different ratio of carbon to silicon compound that is normally found in rock crystal, and, the fracture of light as it reflects through the double terminations.  Herkimer Diamonds are frequently given as a keepsake to someone travelling or moving away-to keep them attuned to those left behind. Herkimer Diamonds are widely believed to have a accessible ‘memory’ that has stored information for later retrieval. The theory being, when the energy vibration match is right, the crystal releases the information.

Herkimer Diamonds like action and to be worked with. They appreciate a good task and shine brighter the more you require of them. Set them a challenge, perhaps to find a solution to something or to find a safe direction to take. The right path for your highest good is a good question.

There are Herkimer Diamonds on the market from other locations that will look the same and have similar qualities. In more recent times they have become available from Mexico and can be considerably cheaper.